The patient, Dee Fletcher, loses the ability to visually recognize shapes, objects, or people. She knows there is something on a table, but doesn’t know that it is a pencil or how it is oriented on the table. She can still perceive color and texture, and recognize materials. Intriguingly, something in Dee can still recognize shapes – for instance, she knows exactly how to position her hand to grab the pencil from the table – but this knowledge is not available to her consciousness.

Everything in this post is quoted from the Open Philantropy 2017 Report on Consciousness and Moral Patienthood, “Visual form agnosia in Dee Fletcher”.

In February 1988, Dee collapsed into a coma as a result of carbon monoxide poisoning caused by an improperly vented water heater in her home.

After a few days of recovery, it became clear that Dee’s vision was impaired. She could see colors and surface textures (e. g. the tiny hairs on someone’s hand), but she couldn’t recognize shapes, objects, or people unless (1) she could identify them via another sense (e. g. hearing someone’s voice, or touching a hand), or unless (2) she could guess the object or person’s identity with color and surface texture information alone, for example if a close friend visited her while wearing a distinctively blue sweater.

[...] Dee often had trouble separating an object from the background. According to her, objects seemed to “run into each other,” such that “two adjacent objects of similar color, such as a knife and fork, will often look to her like a single entity.”

[...] Dee’s problem is not that she struggles to verbally name shapes or objects, and nor is it a deficit in remembering what common objects look like. G&M-13 reports:

Dee has great difficulties in copying drawings of common objects or geometric shapes [see image below]. Some brain-damaged patients who are unable to identify pictures of objects can still slavishly copy what they see, line by line, and produce something recognizable. But Dee can’t even pick out the individual edges and contours that make up a picture in order to copy them. Presumably, unlike those other patients, Dee’s problem is not one of interpreting a picture that she sees clearly — her problem is that she can’t see the shapes in the picture to start with.

Dee couldn’t recognize any of the drawings in the left-most column above. When she tried to copy those objects (middle column), she could incorporate some elements of the drawing (such as the small dots representing text), but her overall copies are unrecognizable. However, when asked to draw objects from memories she formed before her accident (right-most column), she did just fine, except for the fact that when she lifted her pencil and put it back down, she sometimes put it back down in the wrong place (presumably due to her inability to see shapes and edges even as she was drawing them). When she was later shown the objects she had drawn from memory, she couldn’t identify them.

[...] When G&M showed Dee a flashlight made of shiny metal and red plastic, she said: “It’s made of aluminium. It’s got red plastic on it. Is it some sort of kitchen utensil?” Given that she couldn’t see the object’s shape, and only its surface colors and texture, this was a sensible guess, since many kitchen tools are made of metal and plastic. As soon G&M placed the flashlight in her hand, she immediately recognized it as a flashlight.

Weirdly, Dee can actually recognize shapes just fine, but she can not consciously use this knowledge

[...] However, despite her severe deficits in identifying shapes, objects, and people, Dee displayed a nearly normal ability to walk around in her environment and use her hands to pick things up and interact with them. G&M report the moment they realized just how striking the difference was between Dee’s ability to recognize objects and her ability to interact with them:

[In the summer of 1988] we were showing [Dee] various everyday objects to see whether she could recognize them, without allowing her to feel what they were. When we held up a pencil, we were not surprised that she couldn’t tell us what it was, even though she could tell us it was yellow. In fact, she had no idea whether we were holding it horizontally or vertically. But then something quite extraordinary happened. Before we knew it, Dee had reached out and taken the pencil, presumably to examine it more closely… After a few moments, it dawned on us what an amazing event we had just witnessed. By performing this simple everyday act she had revealed a side to her vision which, until that moment, we had never suspected was there. Dee’s movements had been quick and perfectly coordinated, showing none of the clumsiness or fumbling that one might have expected in someone whose vision was as poor as hers. To have grasped the pencil in this skillful way, she must have turned her wrist “in flight” so that her fingers and thumb were well positioned in readiness for grasping the pencil — just like a fully sighted person. Yet it was no fluke: when we took the pencil back and asked her to do it again, she always grabbed it perfectly, no matter whether we held the pencil horizontally, vertically, or obliquely.

G&M soon put this difference to a more formal test. They built a simple mailbox-like slot that could be rotated to any angle (while Dee closed her eyes), and then they gave Dee a thin card to “post” into the slot. When asked to “post” the card, she had no difficulty. However, when she was asked to merely turn the card so that it matched the orientation of the slot, without reaching toward the slot, she performed no better than chance. She couldn’t consciously see the orientation of the slot, but nevertheless when posting the card into the slot, she had no trouble rotating the card properly so that it went into the slot. 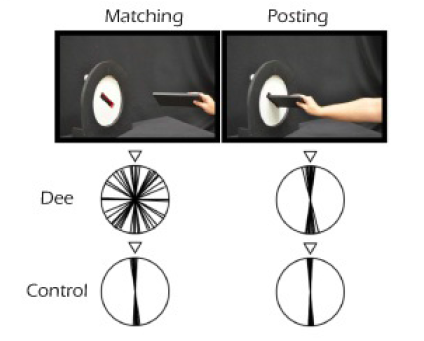 The diagrams [above] show Dee’s performance relative to healthy control subjects, with the “correct” orientation always shown as vertical even though the slot was rotated to many different orientations. Video showed that when posting the card, Dee rotated it well before reaching the slot — clearly, a visually-guided behavior, even if it wasn’t guided by conscious vision.

An oxygen generator is a device that sucks in ambient air with a special pump and produces oxygen by separating oxygen in the air. In fact, after the air is sucked into the oxygen generator, this air passes through the chambers of the zeolite powder. Zeolite powder separates the 21% oxygen in the inlet air from other air gases and directs it to other chambers. In other words, an oxygenator is a device that concentrates oxygen from a gas source (typically ambient air) and is used to selectively remove nitrogen to produce an oxygen-rich gas stream.
https://naabzist.net/%D8%A7%DA%A9%D8%B3%DB%8C%DA%98%D9%86-%D8%B3%D8%A7%D8%B2